I wish I found a magic lamp…

The corrupt Sheikh Sazabiss has abducted Princess Lurana, and he is utilizing every unscrupulous means of power he has at his disposal to achieve his ultimate ambition of conquering the world. The quartet of valiant and fearless warriors bravely come face-to-face with Sazabiss. As they battle to save Lurana, the foursome, freely using magic, their most prized possession, journey to the castle of Sazabiss to save the princess and the planet. When I first played this game I wasn’t sure what to expect, I noticed the visuals were really nice and I thought that the sprite scaling technique they used was pretty cool. For those of you who do not know what sprite scaling is, it’s basically taking the character sprite and either shrinking or enlarging it give a sense of perspective when they go into the background or come into the foreground. Then I as begin to play I noticed that there were four characters to choose from. I usually pick the female character if at all possible because why not. Three of the characters have a really cool fantasy Arabian/Middle Eastern garb except the bald guy named Datta. He looks like an Asian monk and traveled to this Middle Eastern conflict. That main character is named Sinbat (it’s actually not a typo), the lone female is named Ramaya and the muscular character is named Goldor.

The game started off OK but then it just got really boring really fast. I think Sega over did the sprite scaling technique as when the enemies come into to the screen they are huge and it can be hard to see. When I tried it out with four players it was a fucking nightmare, it was nearly impossible to see who was hitting who and where you were in the game. The fighting moves are pretty basic but when using magic the character you chose jumps in front of the screen and does a cool little move and then unleashes the magic upon the enemies. It’s cool to look at at first but then it quickly loses its appeal. The limited move set really makes the game a bit a dull and I found myself using the same move over and over again until the completion of the game.

The levels are nicely done and you go through a pirate ship, Middle Eastern markets, castles, pyramids, a magic carpet ride and an underground secret lair. The enemies are humans, skeletons, demons and other creatures from Arabic mythology I would assume. All of this is visually appealing and nicely done, however that’s about it. The music is decent but you’re definitely not going to hum any of the tunes. The sound effects are typical and the controls clunky. The big issue with this game is the game play, it’s just lackluster. I love beat ’em ups which is why I am writing all these articles but for some reason I just couldn’t wait for it to be finished. I tried each of the four characters and I couldn’t get a feel for any of them. I think since the game was so limited to just attack and jump that I found myself just button mashing to complete the levels. 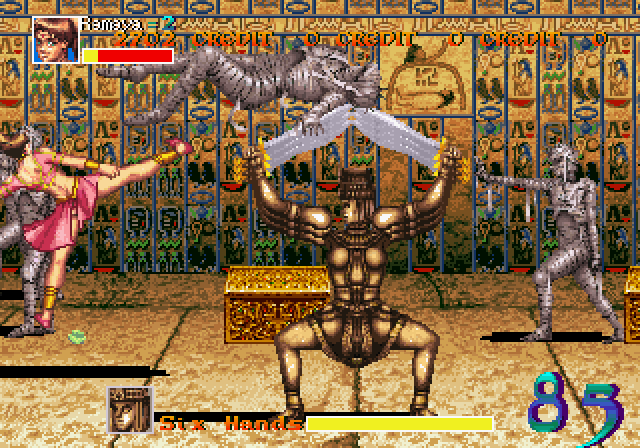 I do have to say that I did enjoy the boss battles but it was just a chore to reach them. I thought that it was just me so I had my neighbor come over and play the game too, he didn’t like it but he thought the graphics were nice. However graphics do not make a game good. I suggested that we play the game together, we did, and nothing changed. The game was still boring and we just talked and drank beer. Being tipsy and then borderline plastered didn’t help the game get any better either. Beating up people just became routine and not fun. The hit detection was off and it felt like they put all the effort in the visual aspect and forgot about the actual game play. I was pretty disappointed since Sega was really hitting home runs with their games. Sega created this game to go up against Taito’s Arabian themed game titled “Arabian Magic”. Why did they feel the need to do this? I don’t know, but I will tell you this wasn’t necessary. I found Arabian Magic to be just as bad as this one. If Sega put the proper effort into the game play than Arabian Fight would have been by far superior to Arabian Magic in every way possible, unfortunately they didn’t and it shows.

Developed by – Sega AM2